Tim Francis is an award-winning entrepreneur from Canada, and the founder of ProfitFactory.com and GreatAssistant.com.  He’s a graduate of the University of Alberta, and a Certified Scrum Product Owner.

In 2010-2011 Tim was blindsided by a rare illness called Erythema Nodosum, leaving him unable to walk for 3 months.  Tim nearly went bankrupt and was forced to re-start.  He promised himself he’d “never be a burn-out entrepreneur again,” a driving motivation which led to the creation of Profit Factory.

Entrepreneurs chronically stuck working IN their business turn to Tim to achieve the Freedom and Control they’ve long sought.  Tim helps entrepreneurs transition from Business Operator to Business Owner, helping them successfully arrange, then delegate to a Production team around them.  Entrepreneurs appreciate their newfound freedom to work ON the business, take time off, travel, or start other ventures.  Employees appreciate how organized and clear the business is once Tim has intervened.

Tim’s been a guest lecturer at NYU in New York City, at the University of Alberta in Canada, and has been a Masterclass teacher on Mixergy.  Sam Carpenter of Work the System says “One of the best, if not the best, is Tim Francis.  I support his work and coaching”, and past-client Ryan Levesque says: “Tim’s help systemizing what we do across our company has set us up to go from seven to eight figures and beyond.”

Tim Francis is an entrepreneur from Edmonton, Alberta, Canada. He is the owner of Tim Francis Marketing and the founder of Profit Factory.  Tim has a BPE degree from the University of Alberta, and a Certified Scrum Product Owner. Tim is a sought out consultant and speaker in entrepreneurship, marketing, and systems.

Tim has been an entrepreneur for over 10 years now. His first business was in 2001 when he was a franchisee of College Pro Painters. In 2009 Tim was awarded one of Edmonton’s coveted “Sizzling 20 Under 30” awards as one of his city’s brightest up-and-coming business leaders.  In March 2015, Tim was a guest lecturer at NYU in New York City.  In July 2015, Tim spoke atop a mountain in Utah at the exclusive, invitation-only Baby Bathwater mastermind.

A perfect storm of stressful events were major contributors to Tim falling dramatically ill in 2011 with a case of Erythema Nodosum.  He was unable to walk or work for three full months. Amidst searing frustration, bitter disappointment and creeping self-doubt, Tim was forced to scrap everything and start from scratch. The soul-searching of those three months, and the businesses birthed from that crippling time have led to a business renaissance for Tim, enjoying greater success than ever before.

Away from business, Tim’s been a multi-award-winning athlete in both High School (ESSMY in St. Albert) and at Grant MacEwan College in Edmonton. Tim was selected to the prestigious House of Commons Page Program (Ottawa) in 2000. Tim obtained a Health Promotion degree from the University of Alberta in 2006.

Tim has also spent time in the entertainment industry as a TV host (2005) and a touring rock drummer (2002 – 2008). In his final year as a drummer, Tim appeared at the Western Canadian Music Awards with his rock trio, Smoothride.

Today Tim lives in Austin, TX, and celebrates his mobility 3-4 times per week participating in Crossfit.

Tim has been a friend of ours for quite a while. He’s been one of our best consulting coaching students.

One of the best, if not the best, is Tim Francis. Listen to Tim. I support his work and his coaching and if there’s anyone I can give a testimonial to, it would be Tim. So pay attention and take him up on his offerings – he’s a good guy and he knows his stuff. 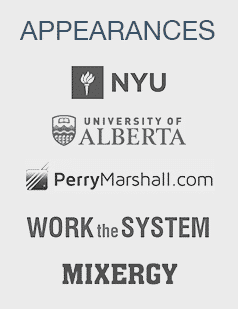